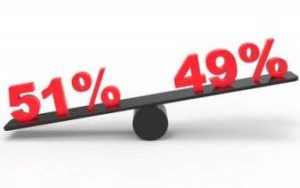 Who’s at Fault and How Much?

The term “comparative fault” refers to a system of apportioning damages between negligent parties based on their proportionate shares of fault.  Under a comparative fault system, a plaintiff’s negligence will not completely bar recovery like states that employ the harsh contributory negligence rule, but it will reduce the amount of damages the plaintiff can recover based on the plaintiff’s percentage of fault. The “pure comparative fault rule” allows a damaged party to recover even if it is 99% at fault, although the recovery is reduced by the damaged party’s degree of fault.

B.  The provisions of Paragraph A shall apply to any claim for  recovery of damages for injury, death, or loss asserted under any law or legal doctrine or theory of liability, regardless of the basis of liability.

C.  Notwithstanding the provisions of Paragraphs A and B, if a person suffers injury, death, or loss as a result partly of his own negligence and partly as a result of the fault of an intentional tortfeasor, his claim for recovery of damages shall not be reduced.

The pure comparative fault system is sometimes criticized for allowing a plaintiff who is primarily at fault to recover from a lesser-at-fault defendant.

Louisiana provides an exception for intentional torts, in which case damages will not be reduced by a plaintiff’s negligence.